On June 9th, 1936 the first public preview of the new film Kitchen Talks was held at the Concert Hall of the Royal York Hotel in Toronto, Canada. 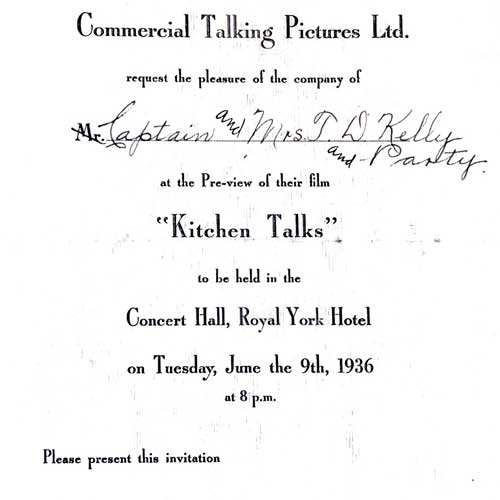 This ls the flrst commercial film which has been made either in Can­ada or the United States in which so large a number of manufacturing products has been represented.

The picture is sponsored by the Provinical Council of Women of Ontario who are ardent supporters of all Made in Canada merchandise.  The members of the executive took an active part in the actual filming of the picture.

Jessie Read, home economist of the Telegram and editor of the column Three Meals A Day take the leads in this picture. She is ably assisted by her maid Mandy Fletcher and such other well-known artists as Grace Webster and George Young both of whom played important roles in the 'Kings Plate' produced here last fall.

The picture is to be shown in practically every town and city in Ontairo to an audience estimated at 200,000. and will be a medium for manufacturers to tell their story in suburban districts where the cost of bringing a regular cooking school is prohibitive.